Jonathan Welch purchased a turkey hunt at our Refuge Hunting Camp during the 2017 Rain Down Banquet in Laurel, MS. If you have hunted turkeys in Mississippi this 2018 season you know that it has been a strange year. The colder than average temperatures and the unending rain has certainly put a damper on the sound of gobblers in the woods.

Jonathan Welch is a friend of Rain Down Ministries and has spent time guiding youth hunters in the past. He has helped prepare for camps numerous years by disking and planting food plots and by putting a lot of sweat equity into our Refuge Hunting Camp Program.

During the 2017 Rain Down Banquet Jonathan bought the turkey hunt and was excited to support RDM as well as have the chance to hunt at our Refuge Hunting Camp. Because of his busy schedule with being married only a few months earlier and with his work he almost let the turkey season get away from him.

He made the call the week before coming and set up the hunt for April 13-15, 2018. The weather was not looking promising for his hunt as the chance of heavy rain and thunderstorms was 100% for his scheduled time in camp. He decided to come anyway. It did rain the first morning of his hunt and he was confined to the lodge with an ever increasing case of anxiety to get into the field.

The rain broke around noon and Jonathan along with Michael Welch (his guide and cousin) were able to get into the field. They started on a property where Michael knew turkeys were located. They immediately located a lone hen but could never locate a gobbler.

We had a group of fishermen on another property who spotted some turkeys in a field down from the lake they were fishing in. They made a call to Michael and he and Jonathan came over to that property. Upon arriving they spotted a gobbler and 2 hens in the field and watched them until they roosted on the edge of the field.

The following morning they set up across the field from where the turkeys roosted the evening before. At day break Jonathan began working his turkey calling magic and quickly realized that there was not just one gobbler but two. The two gobblers had hens in the woods and would not come out to Jonathan and Michael’s set up. After 2 hours of patiently waiting the turkeys began to make their way out to the field to check out the calls that were coming their way. 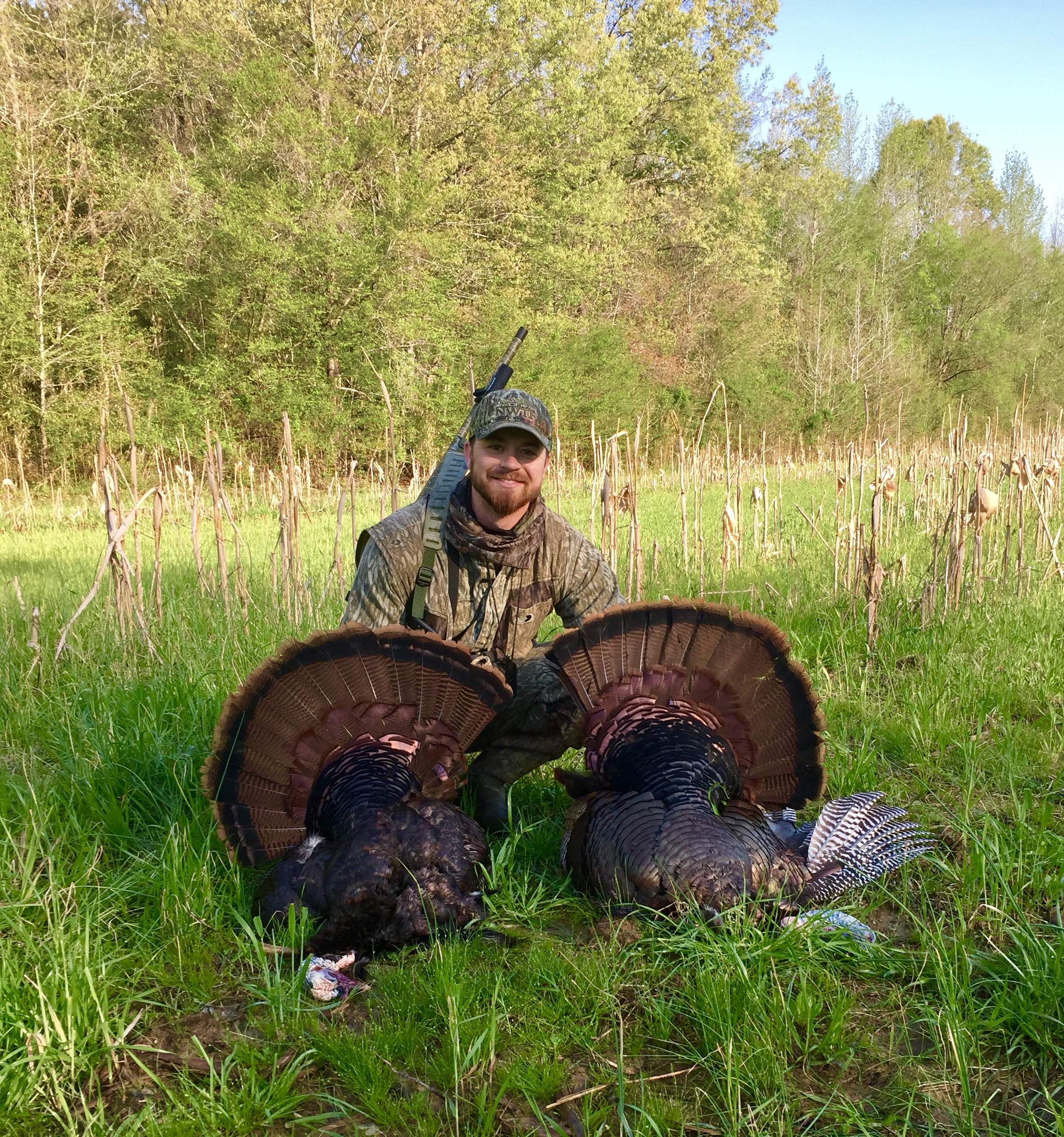 Jonathan Welch with the turkeys that he and Michael Welch killed on the hunt that he bought at the 2017 Rain Down Banquet.

The turkeys made it to 40 yards where Jonathan made a great shot taking out the largest gobbler. After the shot the second gobbler jumped on the first and began spurring him. During the commotion Jonathan handed his gun off to Michael who was able to harvest the second gobbler. It was an incredible hunt between two cousins who have served with Rain Down Ministries for a long time. Michael never intended to shoot a turkey as he was there to help guide Jonathan on the properties. Yet when the opportunity arose they killed 2 turkey with 1 gun and make countless memories. 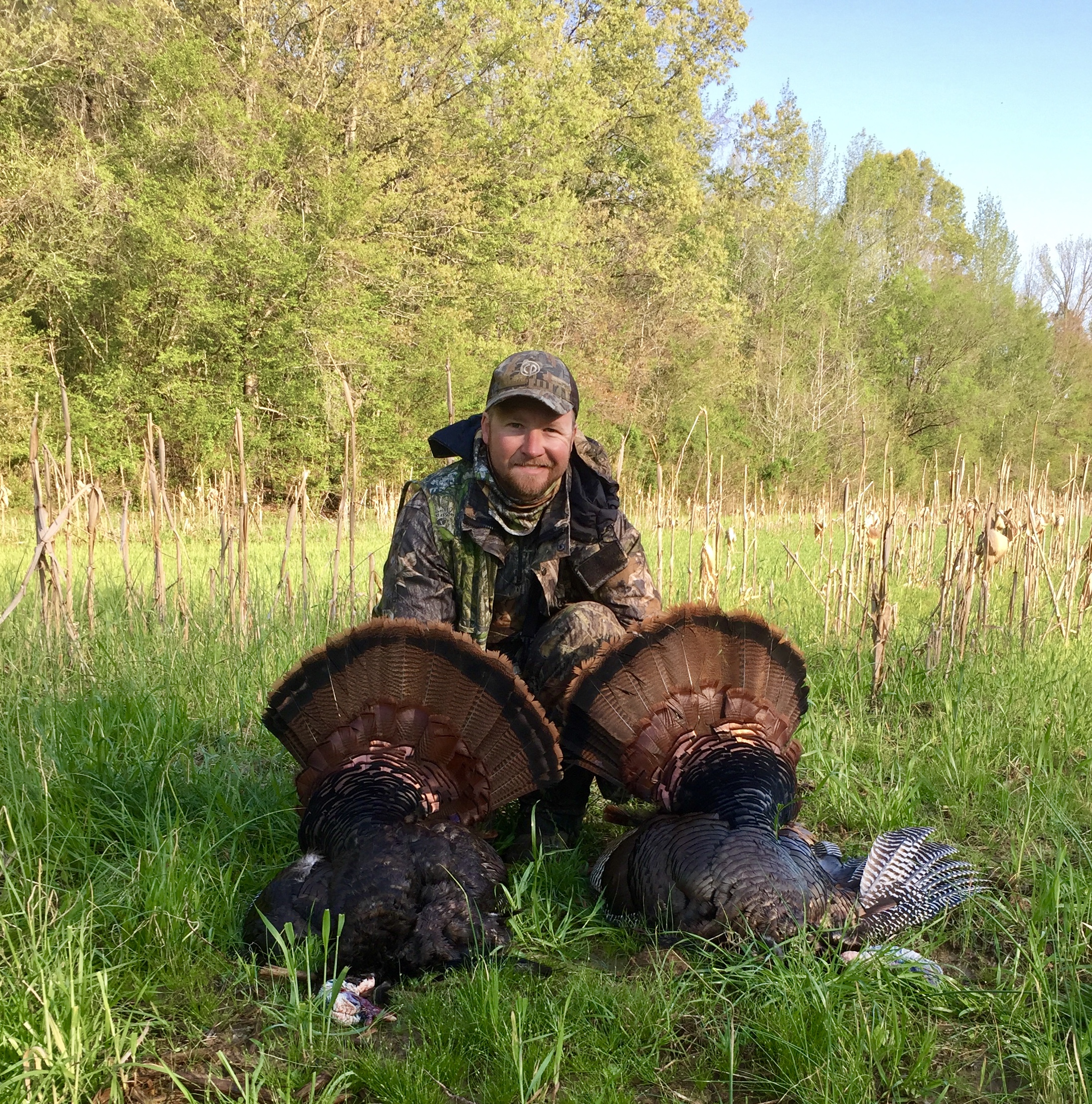 Michael Welch with the turkeys that he and Jonathan Welch killed on a hunt that Jonathan bought at the 2017 Rain Down Banquet.

Below is a video that Jonathan recorded on a Tactacam attached to his shotgun.